When was the last time you took out a box that looked like it said ‘baking powder’, only for you to realise too late that it was baking soda? Don’t worry, you’re not the first one to confuse one from the other!

You’d wonder why manufacturers didn’t name baking powder and baking soda as simply Twin A and Twin B, or just plain old BP and BS. That would’ve made everything a whole lot easier to remember. But would baking be just as fun? Probably not. What do you think?

How are baking powder and baking soda different?

Like two peas in a pod, baking powder and baking soda look exactly the same. Both can also be used in a lot of ways. But dig deeper and you’ll see that there are core differences that set these two compounds apart.

In this article, we’re giving you the tell-all on how to identify baking powder from baking soda. Time to put your white coat on because we’re taking a crash course in Chemistry 101.

Baking powder has acid added to it

Baking powder and baking soda are easy to distinguish once you get to know them better. Knowing which is which starts with understanding their chemical composition.

Baking powder is sodium hydrogen carbonate (a fancy term for baking soda or bicarb soda) mixed with cream of tartar or sodium aluminium sulfate. Sodium hydrogen carbonate is a base, while cream of tartar and sodium aluminium sulfate are dry acids. Simply put, baking powder is still baking soda, but with additional acidic ingredients.

Don’t get your hopes up about making baking powder fizz with sour ingredients, though. You won’t get the same air bubbles (and that fun, hissing sound) from baking powder when you mix it with vinegar or lemon juice. Because the acid-base combination of baking powder results in a neutral pH, baking powder is not as reactive to acids as its volatile twin, baking soda. Unlike baking powder which can have a lower or neutral pH, baking soda has a pH level of 8. Baking soda is a weak base, which means that while it’s still gentle to your skin, it’s also stronger than water as a cleaning agent. You’ll find stronger bases in some of your cleaning solutions at home. Concentrated dishwashing detergents and chlorine bleach (which contains sodium hypochlorite) are just some of them.

As a base, baking soda will have a chemical reaction when mixed with an acid. This is why you’ll see a lot of homemade cleaning recipes that call for baking soda and vinegar. These two are a match made in chemistry lab heaven.

Baking powder has a neutral taste

Baking soda has a salty and bitter taste

If you’ve tried to use baking soda to whiten your teeth, you’ll know that it has a salty and slightly bitter aftertaste. In recipes, baking soda is usually mixed with acidic ingredients to produce a gas-forming chemical reaction. Not only does adding a liquid acid to baking soda help form bubbles in your baked goods, but it also neutralises the bitter taste that can otherwise be unpleasant to your palate.

How to use baking powder as a baking ingredient Muffins aren’t the only breakfast favourite that uses baking powder. Google ‘best fluffy pancakes’ and you’ll see this ingredient mentioned in most of the recipes. A teaspoon of baking powder is usually enough for a pancake recipe that’s good for 2 servings.

Baking cookies with baking powder is a whole different matter altogether. To end the great divide between lovers of cake-like cookies and chewy cookies, bakers recommend using double acting baking powder. Use this as a substitute for regular baking powder for cookies that are light enough to be enjoyable, but chewy enough to be decadent. Yum.

When baking with baking powder, remember to only use the amount that the recipe calls for, nothing more, nothing less. Adding more baking powder than necessary doesn’t mean you’ll end up with breads and pastries that are as light as a feather. In fact, going gung-ho on baking powder can result in baked goods that have a chalky texture and a slightly bitter taste.

You’ll want to leave out the baking powder if you’re obsessed with fudgy brownies. Even if you see baking powder mentioned in a lot of batter recipes, it is usually not included when making brownies. Brownies are best served half-baked, dense, and a little gooey. Adding baking powder as a leavening agent will give you cake-y brownies, and you wouldn’t want that.

How to use baking soda as a baking ingredient 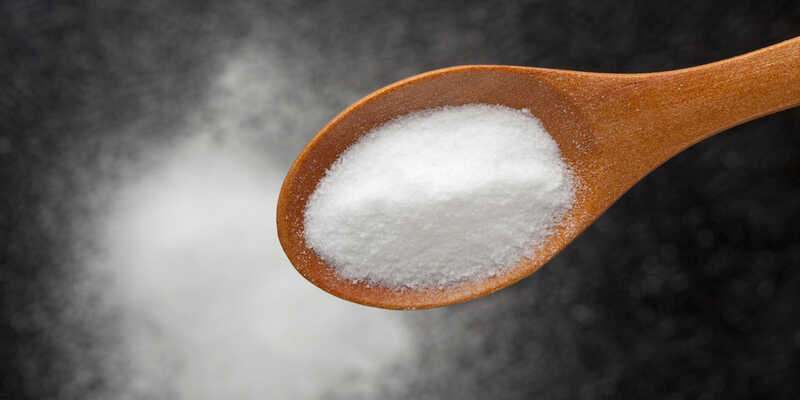 Too much baking soda in a pastry makes for a weirdough, but it’s still an ingredient we can’t totally do without.

When you’re using an acid in a recipe, baking soda is usually the better leavening agent to pick. Wet acids like buttermilk, lemon juice, vinegar, molasses, and yoghurt activate the baking soda and produce carbon dioxide bubbles that make your soda bread, muffins, and pancakes fluffy.

As with baking powder, use only the amount of baking soda required in the recipe. We’re not going for ‘the more, the merrier’ here. When there’s more than enough baking soda in your baking mixture, the end product may become metallic and soapy. Not exactly the taste you’re going for, is it?

As a general rule of thumb when baking, you can use ¼ teaspoon of baking soda for every cup of flour. To be sure, check with the recipe if this will work well – it’s all about creating the right balance when you’re baking.

4. Effectiveness as a cleaning agent Baking powder may be more popular among home bakers, but baking soda is the darling of home cleaners. When choosing between baking soda vs baking powder for cleaning, there’s no question about it: baking soda wins hands-down.

Google ‘natural cleaning ingredients’, and you’ll see that baking soda is the star in almost every homemade cleaning recipe. The ways with which you can clean with baking soda are endless.

It’s an effective mould and mildew remover, an eco-friendly polish that keeps your pots and pans shiny, and a non-toxic scrub that degreases kitchen appliances. It’s such an awesome cleaning agent that house cleaning experts recommend it as a green alternative when you want to make your home spotless and fresh-smelling.

Baking soda is so safe, you can even use it to whiten your teeth naturally! Simply mix a paste made of baking soda and the juice of half a lemon. Lightly brush it on your teeth as you normally would, then rinse. Voila! Sparkly pearly whites in seconds.

And the list of baking soda benefits goes on. It’s a given – the usefulness of baking soda can’t be overemphasised. I’m a huge fan. While baking soda goes by many names, I personally call it my miracle powder.

Distinguishing between bicarbonate of soda vs baking powder

Understanding the differences between bicarb soda vs baking powder makes it easier to identify them. The next time you open your pantry for baking supplies, you’ll most likely reach for that box of baking powder. And when you’re feeling extra nifty, you’ll probably whip up that winning baking soda-and-vinegar combo (enhanced with a few drops of peppermint oil, of course), then give your home a thorough top-to-bottom cleaning. For old school erupting volcano experiments, you definitely know which ingredient to go for.